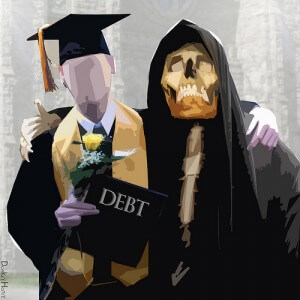 College education costs continue to rise and so do the number of college graduates who are carrying a considerable amount of debt from their student loans. Ideally, students would graduate and use their degrees to find high paying positions that allow them to pay off their loans in a timely fashion. Sadly, the job markets today are cyclical and a career is not always easy to find.

In 2011, the United States Student Association (USSA) projected that borrowers were holding $730 billion in debt from student loans. Over half of those borrowers are in default or deferment. Currently, debt from student loans is growing faster than revolving credit card debt. For this reason, many who are struggling with repayment of their student loans are considering bankruptcy. The laws as they stand today do not usually allow this type of debt to be discharged.

While you may try to discharge your student loans by filing bankruptcy, this is a very difficult task to accomplish. Under the current laws in New York, it is almost impossible to eliminate your debt from student loans through bankruptcy.

A Second Circuit bankruptcy court finds for the defendant, Charlotte School of Law. According to the court, the Charlotte School of Law did not violate the automatic stay provision when they started attempting to collect payment on student loans that the debtor, Kenneth Desormes, accrued during his 3-years as a student at the college.

Desormes attended the college from 2007 to 2010. He borrowed more than $100,000 to finance his education. He discontinued attending the school in January of 2010. Desormes had already accrued a debt to the school of more than $12,000. Shortly after withdrawing from school, he filed for Chapter 7 bankruptcy.

In February of 2010, Desormes wanted a court to determine that the student loans he used to fund his college education would be dischargeable in the Chapter 7 bankruptcy that he was filing.

Desormes, along with thousands of other recently graduated law school students who are facing wage garnishment, foreclosures and their own Chapter 13 and Chapter 7 bankruptcy filings entertained the determination that their college debt could be discharged in their bankruptcy filing.

The court found that the debtor (Desormes) did not offer the court:

He filed his bankruptcy case within a month of discontinuing his education at the Charlotte School of Law and the commissioning of the adversarial proceedings.

According to the Judge, the debt incurred by student loans is not dischargeable under Section 523(a)(8). The Judge also noted that his debt was “an obligation to repay funds received as an educational benefit.”

Desormes did not attempt to pass the Brunner test to show undue hardship. The court did not discharge his debt from student loans.

New York bankruptcy courts will only discharge your student loans if you show that repaying your loans would cause you to suffer a severe hardship. This is a very difficult standard to meet. The courts will usually take a number of factors into consideration including your health, age, expenses, income and the amount of time that your financial hardship is expected to persist.

A recent report by the U.S. Department of Education and the Consumer Financial Protection Bureau requests that Congress consider modifying the 2005 bankruptcy reform law that eliminated the bankruptcy exemption for private student loans.

If you have debt from student loans and any other kind of debt, we can help. While student loan debt is not dischargeable, the other debt is.

Bankruptcy is an Opportunity to Catch Up on Student Loan Debt

Getting Out of Student Loan Debt