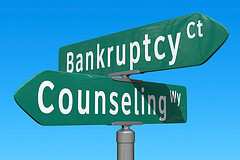 The “Means Test” in bankruptcy was created through legislation passed in 2005 and is used during a Chapter 7 bankruptcy case to determine a person’s eligibility to file. The test analyzes the debtor’s income over the past six months prior to filing and compares it with the state’s monthly median income. The Means Test is pretty complicated, and it is advisable to consult a bankruptcy attorney to help correctly apply the test to your specific circumstances.

The following terms used in the Bankruptcy Code will help you to understanding the Means Test:

Income – Income from every valid source applies, including wage earnings, pensions, business income and unemployment benefits, just to name a few. The debtor’s spouse’s income is also included even if the spouse is not filing for bankruptcy (unless separated or living apart.) However, payments from Social Security are not factored into total income for the Means Test.
Current Monthly Income – This is the average of the filer’s income from the previous six months.
Monthly Median Income – A state’s median income is the midpoint of all households in the state, but varies by household size.

In Chapter 7 cases, the debtor’s annualized current monthly income should be compared with the state’s median income for the corresponding family size. Median income for households in New York State is as follows, according to the U.S. Census:

The Purpose of the Means Test

The Means Test is applied to determine if the filer’s petition for Chapter 7 bankruptcy is “abusive,” i.e. their monthly disposable income is too high. If the filer’s current income is calculated to be less than the New York State median, the debtor may file. However, if their monthly income is higher than the median income for New York State, then the debtor’s monthly disposable income must be determined.

The federal Bankruptcy Code considers a Chapter 7 filing to be abusive if the debtor’s disposable income over a 5-year period is more than $11,725, or 25% of their non-priority unsecured debt that is $7,025 or more.

Filing Chapter 7 bankruptcy is usually not an option for the debtors in these categories. However, since the presumption created by the Means Test is rebuttable, a debtor still may still be able to file Chapter 7 bankruptcy if there are special circumstances. If the debtor is not able to overcome the presumption that the filing is abusive, then the case will be dismissed. (Their case could also be converted to a Chapter 13 filing if the debtor qualifies for this type of bankruptcy.)

The Means Test does not apply if:

• The debtor is a disabled veteran and their debt was incurred primarily during active duty or homeland defense.

• The debtor was a member of the National Guard or Armed Forces Reserves and on active duty or homeland defense for at least 90 of the 540 days before filing.

• The debts incurred by the debtor are less than 50% consumer debts (i.e. more than half of the debts are business-related.)